I started feeling nervous 2 days prior to my fight day. For those who don’t know me, I become more and more quiet and short tempered as the competition approaches. Jess Fraser, as always, was the perfect partner in crime for me leading to the comp. She, more than anyone I know,  can put up with my altered mood and understand that it’s not personal… I’m just nervous and in kill mode.

We still managed to laugh a lot, eat some tacos off the floor, relax in the pool and watch Jessica Atkinson take on the white belts on Day 1 of the competition (and win a bronze!).

As much as I was ‘pooping’ my pants, I didn’t fight the emotions this time, I just let them be and accepted them. I had a much easier time imagining scoring points and finishing matches and reversing bad situations in my head. I was calm, quietly confident and sick of waiting around.

The night before, I was on weight, fed and hydrated. It took a lot of effort to get there and I did give myself a little pat on the back.

Before sleep, Jess and I talked about goals. My sports psych  Anthony and I did not set results oriented goals for this competition, rather I had a checklist of what it would take me to be satisfied with my performance at Light Feather at the Mundials.

In retrospect, it is easy to say that competing was FUN, but in reality, I was wondering why I do this to myself AGAIN and how lovely it would be to have a Bloody Mary outside in the sun with my friends instead.

So how did I make the day enjoyable? 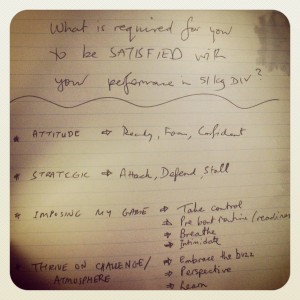 Firstly, I used cue words that were loaded with meaning and which I worked on  and used for a year at every training session. I made sure I was READY and FOCUSED.

Strategic component was addressed in months prior to the comp and sharpened at the camp. I did not give myself room to lose in the last 20 seconds of the fight like I have done so often. I was clear minded about my game plan and every position had a purpose in my head.

My breathing/pre fight routine is something I have worked on for about 8 months and I was fairly comfortable with it being my second nature. However, I did make the initiative to take control. When the marshall called us over to the gi and weight check, I went first. When they called us to go to the mat, I made sure I went first. I stepped on the mat first, and I shook the refs and her hand first. I got my grips first. I wanted to dictate the fight and take charge.

My favourite task was to embrace the atmosphere and feel the buzz. Knowing that I get to compete at the WORLD CHAMPIONSHIPS doing what I LOVE, instead of being at work, made me feel completely ALIVE and in the moment. I took a few seconds to look up and take a deep breath to take it all in before each fight. I even managed to smile to myself, because in the end, I was kicking goals. The result would take care of itself, and if it wasn’t the result I was after, well, I was still achieving my goals with a SMILE on my face.

Jess drove us to the venue, I passed my gi and weight check and warmed up. Dave Hart was there with me in the bullpen every step of the way. I even managed to enjoy the moment with him. 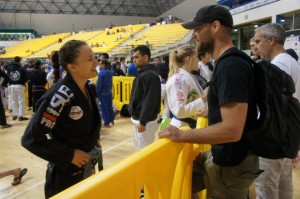 I had a bye and then my first fight was over quickly. It went according to plan -I pulled guard, swept, passed and choked in a 1:30. Energy saved,  one down, 4 to go. 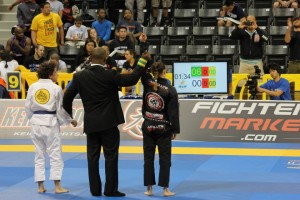 Second fight was a little harder. I was many points up but unable to submit even after a few attempts from mount and side control. I have to say I am not used to girls my size or smaller! We went the distance, but I never felt in danger. 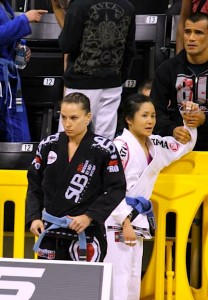 Usually having Cobrinha coach against me would intimidate me. This time though, I was not fazed one bit. IN THE ZONE!  Photo @SweepMountSubmit 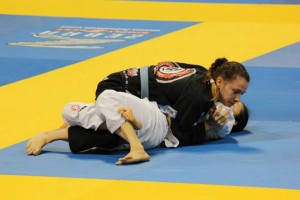 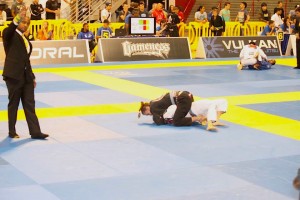 3rd match started good, but then I was unable to establish the guard I wanted, as I let go of a grip. Fortunately, I never panicked, worked through my open guard to closed, swept to mount, attempted to choke, got knee on belly a few times, passed a couple times and the timer went. Again, I couldn’t quite finish, but I did not care. I was there to win one match at a time. 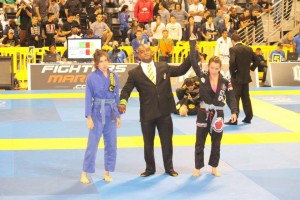 I remember thinking that I am now in the semi finals of the World Championships. It was actually quite an emotional moment for me and I was so present in it that I nearly had tears in my eyes. I got to share it with the Aussie team and it made it so damn real. But my job wasn’t done yet… 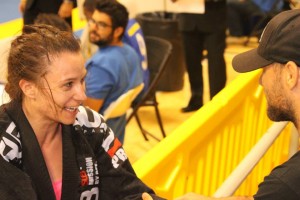 The semi-final was a very strategic match for me. I trusted my own judgement more than ever and I listened to coaching. I finally got it right, attempted a few foot subs and was confident that I was not going to get passed. I talked about this exact scenario with Daniel Shaw 3 months before the Worlds and we practiced it mentally and physically… it was another proud moment for me. 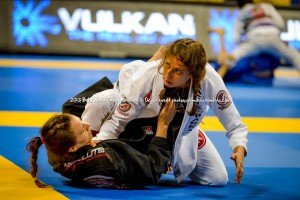 I went back to the bullpen more focused then ever. One match to go. I stayed calm, took a minute to again enjoy the moment, and then I was READY. We had three refs for the final, which made it feel more official and more special. 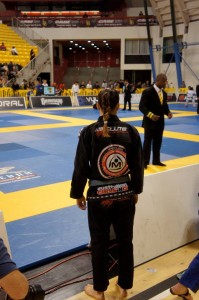 Last deep breath in. GAME ON! 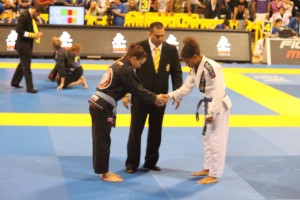 We shook hands and both wanted guard. It was a double guard pull and after grip fighting for a while, I decided to come up. Again, I talked about the possibility of winning the final by an advantage from a double guard pull with Lachie for months. I drilled it with Sophia and Jess at the camp. I was more than prepared for this situation.

Then I got into her closed guard… Uh oh. She was good from there. The attack attempts were flying at me and I patiently defended for about a minute. Then something switched. I wanted it so much, that if I was going to lose, I was going to make it very, very hard for her. So I fought with everything I had. Another minute later, I managed to open the guard… we were back in my terrain. 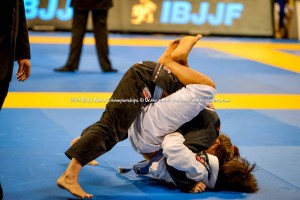 However she was a tough girl, with great grips and although I had a few good attempts at leg drags, nothing eventuated. 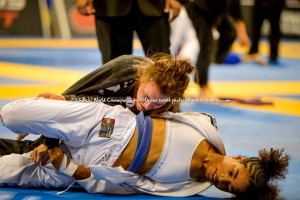 We got restarted in the middle with 30 seconds to go. This is when I first really believed that I could win. The challenge was to keep my concentration up… competitors, when down on points become super dangerous in the last seconds of the fight. I knew I wouldn’t get swept, I just had to watch the subs. I fought my heart out and finally the timer went…. 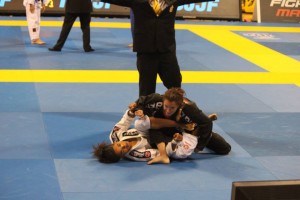 The moment I realised I’ve won 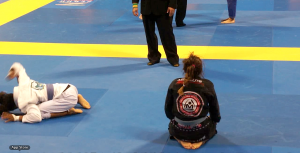 Trying to believe it

I was  a little shocked and numb, and I don’t think I can adequately describe my emotions in words…

I stole a little moment for myself, and just sat there on the mats amongst all the mayhem. When I looked up at the Aussie camp and everyone was going nuts, I could not contain my happiness. The best feeling in the world was sharing it with everyone.

I was just so proud that all the hard work has paid off and I would have something to show for all the people who invested their time and energy into me.

What an epic moment! 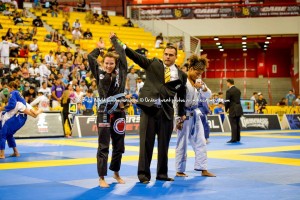 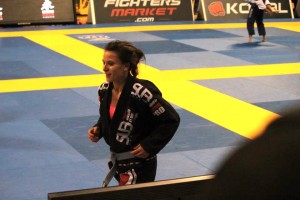 I got to share a special hug with Jess, and I think it speaks a thousand words. This medal was is as much hers as it is mine. 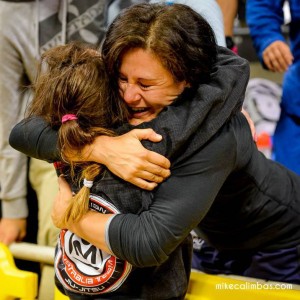 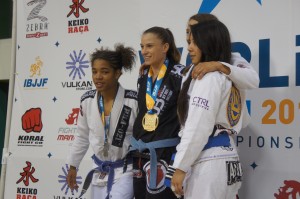 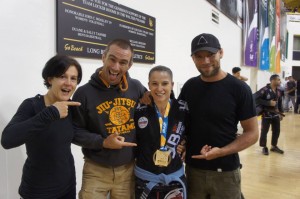 Jess, Cam and Dave… Couldn’t have asked for a better support team!

I only wish Lachie and Thiago were there to witness it and share the love, but I am certain they were with me in thoughts…

I got to walk around with my medal for the rest of the day, stoked with how it turned out. I got through 5 fights, scored about 50 points and had no points or advantages scored against me. I achieved all my goals and executed the plan perfectly. The results did take care of themselves… 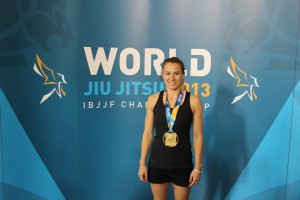 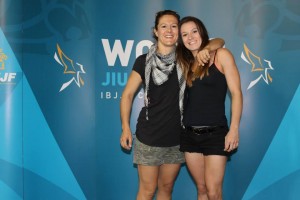 In the next entry, I will cover my open weight fight and the rest of the Mundials experience.