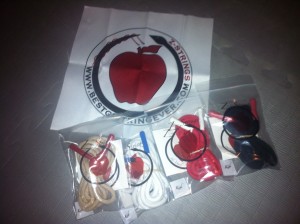 David from Z-Strings at http://bestgistringever.com sent me some gi strings to put in my gis about a week ago. What are Z-Strings you ask: From their website:

“Z-Strings are specially manufactured 100% cotton string with a strong woven inner core and a tightly knitted cotton outer sheath. The knitted outer shell has a slight texture that will hold a knot even under the most rigorous training sessions, and the tough inner core can withstand being pulled, prodded, and strained. The string is what a string should be – round, and thus, it will not, and cannot, get caught up inside the GI pants. Can it fray? NO WAY.”

I, like most other grapplers I know, am usually annoyed at my gi pants. First World problems, I know…BUT… the strings often come undone, and I end up having to have to stop mid-roll to adjust my pants and re-tie the knot. When I used to wear my Atama gis, they were the main culprit. I ended up wearing shorts under my gi, just in case my pants came off and exposed my butt. That is why David’s idea of custom made round strings appealed to me.

I have to say customer service was second to none. David advised me on the size and what colour combinations would look good. My gi size is A00 or F1-2 (depending on the brand), so I got Kids size of Z-strings.

Colour choices for the string include: red, white, black, navy and neutral

I got to choose 4 combinations:

I received my gi strings in about a week and put them in. Watch the video on how to re-thread your gi pants here – http://bestgistringever.com/videos/

So, apart from looking pretty, I was keen to test out the hype at training.

The strings are definitely easier to tie up and draw your pants up tight (my A0 are slightly too big, so I do this a lot). During training and rolling, I actually forgot about tying up my pants, because they were still done up and covered my behind. The whole session!

Here are some before and after pics. (And yes, I did get caught in the bathroom taking selfies of my crotch. It was a little awkward to explain what I was doing to a woman who didn’t even know what BJJ is) 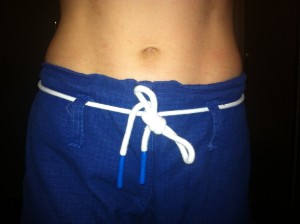 After training (1.5 hrs rolling) – Still in one piece, but definitely slid down a fair bit. 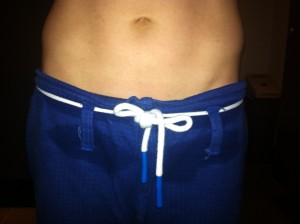 It’s a cool little product, which doesn’t seem like much to be excited about, but makes training that little bit sweeter and more comfortable. Is it necessary? Probably not. But, if you are having similar problems to me with your gi strings, I would definitely suggest you give Z-strings a go!