“Maturity is a big part of success in fighting, because it means you undertand the game – that losing is part of the game. It doesn’t mean to get yourself get conquered, but to know that you can win again, at the right time you can be great. The key to doing great in competition is to accept” 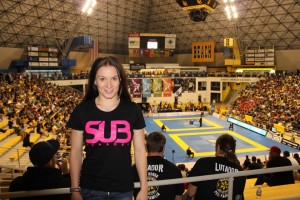 After the training camp was done, it was time to pack our bags up, chuck them in the car and drive across the desert from Las Vegas to Los Angeles. Our goal – to compete at the 2012 World Championships. Usually, I get pretty nervous at least a week before the competition. However, competing at the Worlds was so surreal to me and seemed so far away, that I was able to save my nervous energy for later and not even think about the event. For the first time ever, every time I thought about fighting, I was pumped and excited, but not nervous. It was a great feeling.

My goal at the start of the year was to get through one round. However, I started to gain confidence throughout the camp and wanted more. I am a dreamer, however I also stay very realistic in my possibilities as a BJJ fighter. Even though all my hiccups in my preparation (torn medial ligament in the knee 3 weeks before, a large strain of my strenoclavicular joint and the AC joint 1 week out of the comp and a jarred thumb), I was feeling good. I just wanted to fight and I wanted results.

Lachie – my biggest supporter and inspiration

When we got to LA, I met Lachie at the hotel. It is so much easier to have someone so close to share the experience with and who keeps me so level headed. I was waiting for the butterflies to happen and they certainly did as soon as I looked at the draw. 35 girls in my division. I had a bye first round and second round I was against a girl who medalled at last years Worlds. It was a real struggle to keep my mind calm and at bay, and not allow my over-active imagination to go over every possible fight scenario.

Finally the day arrived. I woke up tired and nervous. Fortunately, I did not have to worry about weight, as I lost a few kgs during the camp and was going in as the lightest competitor in my division. I passed the weigh-in and the gi check and as I started a gentle warm-up, they called my name up. 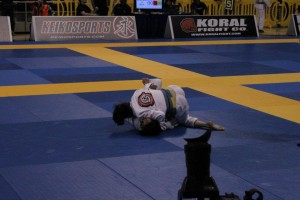 The nerves disappeared as soon as I shook hands with my first opponent. She pulled closed guard and I was able to open it and get a few advantages for forcing half guard with a cross face. With not much time left on the clock, I played it safe and stayed out of trouble. I have been working a lot on my competition game lately and one of my problems has been being up on many points but chasing more points/subs and as a consequence rushing, being greedy, making mistakes and sometimes losing the fight. I was happy with round 2. Safe, clean and in control. 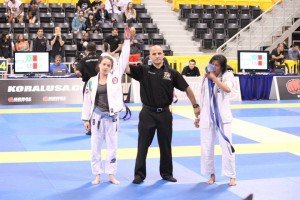 Round 3 saw me up against a Lloyd Irvin girl. Again, she pulled guard and went straight for a DLR sweep. This is usually my comfort zone for passing, but surprisingly she swept me hard and fast. However, I was able to force single X guard on her and sweep her straight back with a single X. She then pulled me into closed guard and that’s when the danger started. After a few attempts of opening her guard and her attempts at sweeping me, she got a kimura set up as I was defending a sweep attempt. I had to tap pretty fast… 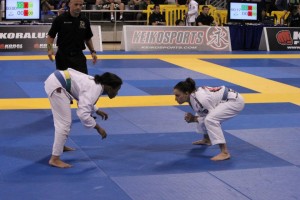 So that was my World Championship over. The girl ended up winning the title. I was annoyed that I wouldn’t get the chance to test myself in further rounds and fight for a medal – which was just one round away! However, I was extremely happy to hit a single x sweep in this comp and with how I handled myself throughout the tournament.

The next 3 days I spent watching my teammates, other Aussies and Lachie compete, win medals, get through rounds and achieve their goals and totally inspire me. The general atmosphere in the ‘Australian Camp’ was amazing, with everyone supporting one another and having each other’s back. Watching the black belt finals put everything in perspective for me and made me realise how small I really am as a blue belt, and how many years I have ahead of me to get to a level where I even begin to understand jiu jitsu. 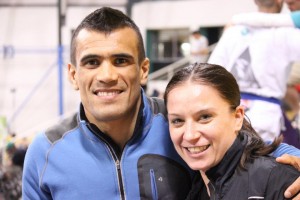 The biggest thing I have gained out of this competition is confidence. Confidence to know that I can mix it with the best in the world at blue belt level. Confidence to trust in my techniques and instincts. Confidence to be more aggressive and to have patience. I have absolutely no doubt that my hard work does and will pay off. I just cannot wait to come home and start training for my 2013 Worlds campaign.

But most importantly, I have learnt that a competition does not define one as a fighter. Not winning a medal at these Championships does not mean I am bad at BJJ. It means that I have many things to work on, an attitude to improve on and lots of fun to be had. This is my passion and my dream and I am living it. It doesn’t get much better than that! 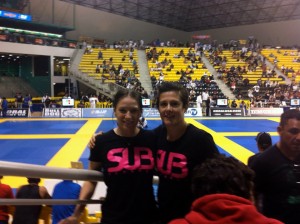 Jess -an amazing friend, training partner and a total inspiration. And 2nd in the World!