When we looked up the flight schedule from Cuba to Ecuador, we realised it went through Costa Rica, so we decided to stay there for a few days. And I’m really glad we did.

Then we thought we could even co-ordinate the trip with doing Panama Open, but unfortunately it was ridiculously expensive and time consuming to get there.

Originally we wanted to spend 5 days at Manuel Antonio National Park, but a last minute read of reviews convinced us to also go to Drake Bay, near Corcovado National Park.

We spent a night in San Jose and flew to Drake Bay early the next morning. The plane was tiny – I think it fit about 8 passengers, but the views on the way were stunning. We landed pretty much in the middle of an isolated jungle and settled into our cabin near the bay.

Drake Bay has been accessible only by sea until recently, and consequently remains a largely pristine low-land tropical rainforest. It is one of the last such remaining areas on the Pacific coast. The population of Drake Bay is only about 1,000 and apparently most people live up to 100 years of age. It is easy to see why… with no banks, highways, pollution, traffic or fast food outlets life there remains pretty relaxed and stress free. 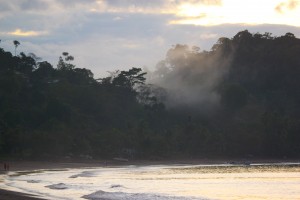 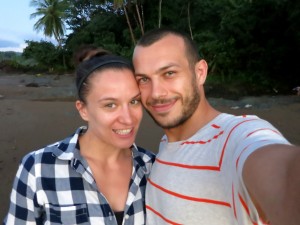 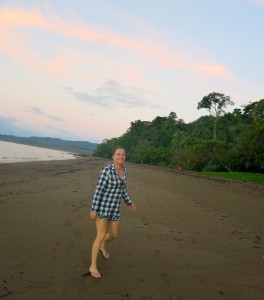 The food was also amazing, especially after spending a week in Cuba. One restaurant called Gringo Curt’s Seafood and Visitor’s Centre surpassed all our expectations. The menu only had 3 things – catch of the day with vegies, fish tacos or fish pasta. The fish was whatever the fisherman caught that day. It was perhaps the best fish I have ever eaten and to top if off Curt was super informative and friendly.

That night we did a night bug walk with Tracie the Bug Lady. Tracie and John are amazing at what they do, full of passion and knowledge. The tour included a 3 hour walk through the dark in the outskirts of the rain forrest. We got to see some pretty cool things like the Bolivian Wondering Spider, Trap Door Spider, Net Casting Spider, a massive Walking Stick, Whiptail Scorpion, lots of different species of frogs and toads, bats – including a fish eating bat, creepy bugs that have brain altering effects on other insects, sleeping birds and an owl. Looking for shiny eyes of snakes on the trees in the dark, was a little creepy, but so great to experience! 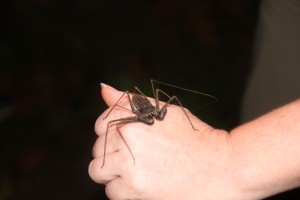 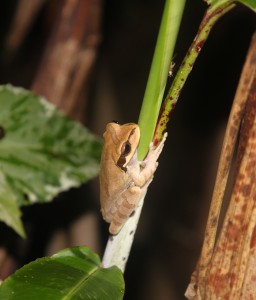 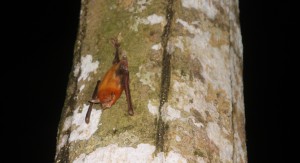 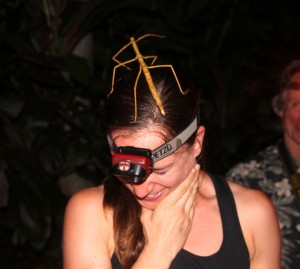 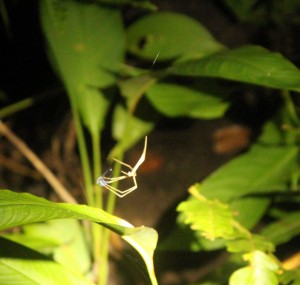 Another cool thing we got to do is a day trip to Corvovado National Park. It’s still pretty inaccessible, so we got a motor boat which took about 1 hour from Drake Bay. The ecological variety there is quite stunning. National Geographic has called it “the most biologically intense place on Earth in terms of biodiversity”.

We trekked for about 4 hours through a dense rainforest, looking for wildlife, and found plenty of it. The rain forrest provided the perfect shelter from the scorching sun and apart from being humid, it was quite enjoyable.

The highlights included seeing the 4 species of monkeys – Howler, Spider, Squirrel and White Faced, a sleeping Tapir, a Collared Peccary, crocodiles (including one swimming in the ocean, 1km from shore), Bull Sharks, Tucans, eagles, many different birds, bats, owls, and crabs. I wish we got to see a snake, sloths and a puma/jaguar, but beggars can’t be choosers. It was just incredible to be so close to nature in their own habitat and I hope that Corcovado stays this untouched for years. 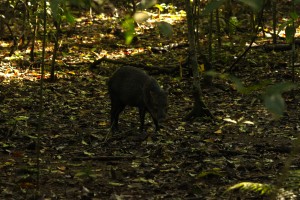 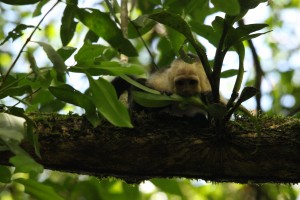 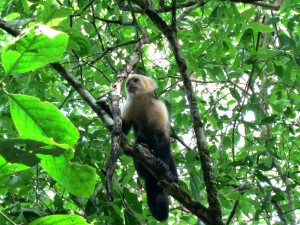 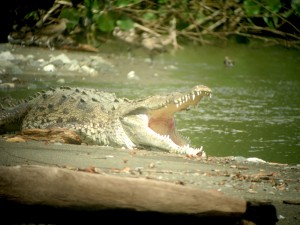 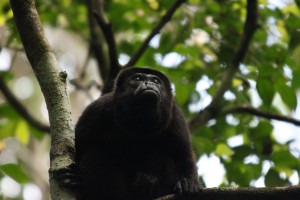 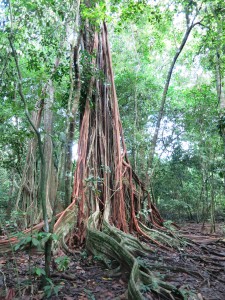 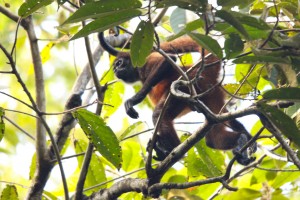 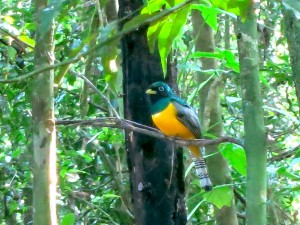 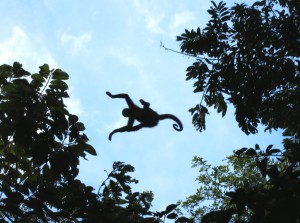 One night while swimming in the ocean with glowing, phosphorescent plankton, we tried to take a long exposure shot for a great photo, but a wave hit a camera dropping it in the sand and water… Needles to say the camera didn’t turn on for 2 days and with the next destination being Galapagos Islands we were in a bit of a panic. However, after drying it out in the sun and with a hair dryer, it turned on again and so far so good… we are keeping our fingers crossed.

The last 2 days of our stay in Costa Rica were planned in Manuel Antonio National Park. To get there, we caught a motor boat for about 1.5 hrs through the mangroves and then a 3 hour bus.

We had a beautiful little hotel right on the beach. Manuel Antonio is a much smaller National Park,but the beach was incredible with clear, warm water and nothing in it that could eat you. 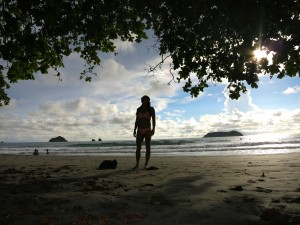 Unfortunately, it was very crowded and touristy, compared with Corcovado and I hope it’s not a sign of what’s in store for Corcovado in the next few years (specially as they build a highway to get there). 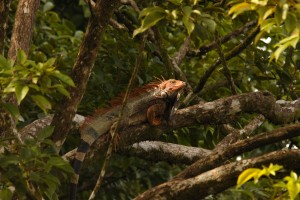 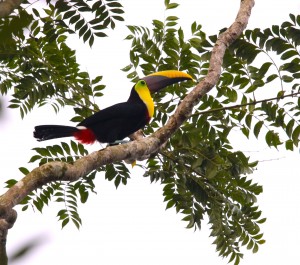 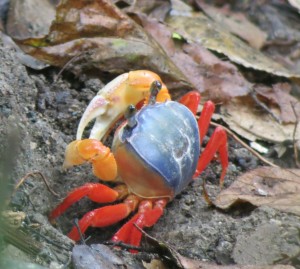 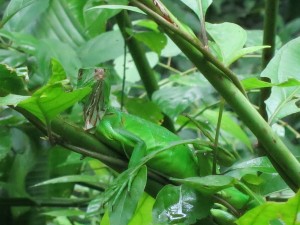 Finally my dream of seeing a sloth came true at Manuel Antonio. We saw about 5 different ones, including a little baby one. They are so awesome and deliciously lazy and I feel so lucky that I got to see one for myself. 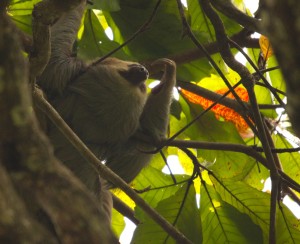 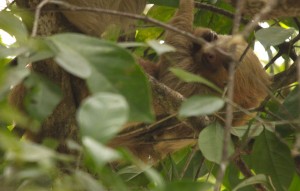 If you haven’t seen this sloth cartoon, you should. It made me fall in love with sloths!

We are now sitting at the airport in Bogota, Colombia, waiting for a flight to Quito in Ecuador. Then we are off to the Galapagos Islands in the morning, where we will do a bit of BJJ and try to find a cruise…so damn excited!

My complete failure at dealing with injuries.