Last couple of months have been busy. Work and BJJ have kept me occupied as well as the excitement of Lachie competing at the ADCC in Brazil, my best friend Amy getting married and the announcement that Lachie has been invited to compete at the Eddie Bravo Invitational. SO many good things happening. 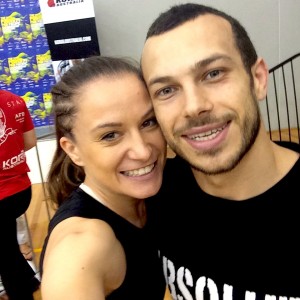 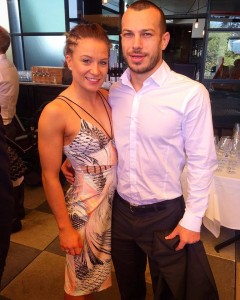 I have recovered from my injuries and am pretty close to 100% now. I ended up having about 7 weeks off and then slowly got back to drilling, specific training and eventually rolling. My rib took a good 8 weeks of healing before I could lie down and play guard with minimal pain. My torn MCL still gives me trouble when I try to knee cut like Leandro Lo, and after much denial, I have accepted that I am in fact not Leandro Lo. Positive side to this story is that I now pretend to be Murilo Santana as I try to learn how to over under and double under pass.

I was itching to compete again, as it has been the longest time I’ve had between competitions in my BJJ career. My last comp was the World Champs in June, so I was anxious to get my competition cobwebs out.

Although the numbers at this year’s Pan Pacific Championships were low for purple belt women, I was excited to fight 2 ladies from Perth, whom I’ve never rolled before. As always, I had specific goals in mind and for this competition they were:

1. Finish all my fights with a submission

3. Sweep or submit with a kimura from the bottom

Gi weight divisions were up first. I won my first fight by a bow and arrow choke from the back after sweeping, passing and mounting. My second fight started well until I went for a half guard sweep and lost control of my opponents knee as I started to come up. During a scramble, I was caught in a kimura. Luckily for me, just about everyone at Absolute South Yarra is obsessed with kimuras from everywhere, so I’ve had more than my fair share of experience in being in them. I patiently waited for an opening and managed to get out. I then proceeded to pass, mount, take the back and choke from the back. It was a pleasure fighting such tough ladies. 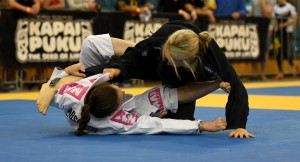 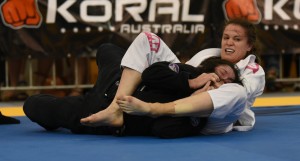 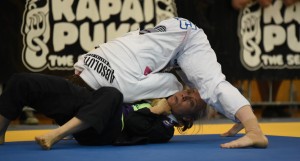 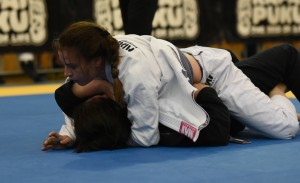 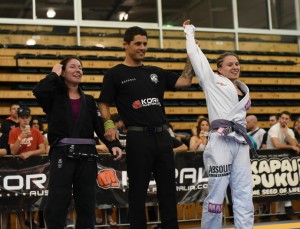 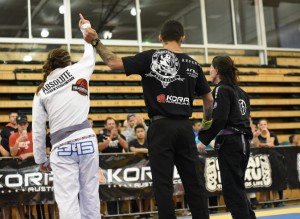 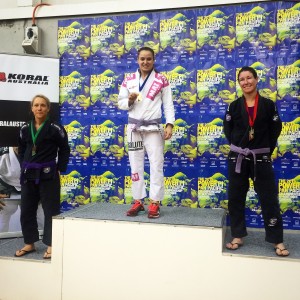 No Gi was up next. I tried to wrestle a little in my first fight, but couldn’t get anything to eventuate. Wrestling is something I am working hard on at the moment and I definitely hope to see some improvement in the stand up part of my game. After a while, I pulled single x and swept. We ended up standing once more, so I pulled again, this time securing half guard. I found the kimura grip and managed to sweep with it, transitioning straight to a submission from on top. In the final, I had the same opponent as it was a 3-person division. I pulled quickly and locked up a triangle, ending the fight with a triangle/armbar.

It was a relief to win two more Pan Pacific Titles, but more than anything I was happy with the way I fought. I made mistakes, but tried some new moves I have been working on since the Mundials.

Absolute divisions were scheduled for Sunday. It was a very long weekend and I was truly exhausted by the end of it. Unfortunately no one entered apart from my team mate Kim and I. I always enjoy fighting Kim – she is tough as nails and a great sport. In the no gi, we double guard pulled, but I forced single x. Eventually I transitioned to 50/50 and got a quick foot lock. While watching Lachie execute the Darragh O’Conaill x-guard sweep variation during one of his matches, I knew I wanted to pull it off as well. So in my gi fight, I set up my x-guard with the grips ready to sweep, but I wasn’t getting the reaction I needed. Instead I entered 50/50 and went for a foot lock again, getting a quick tap. 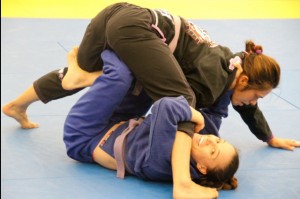 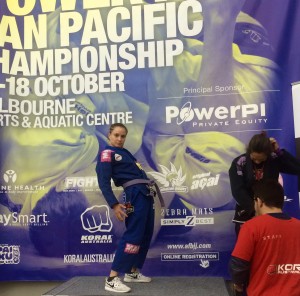 Such pelvis. Much thrust. 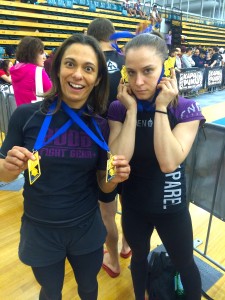 That was the end of my Pan Pacs. I was happy with always trying to upgrade my position and submitting in all my fights. I have been working extremely hard to become a submission fighter and push myself to always go for the finish in training. It makes me take more risks, makes me understand more BJJ and makes my journey a whole lot more fun.

Absolute MMA had a small team this year, but we were very successful. Our purple belt squad was the real Dream Team with nearly everyone winning their gi and no gi divisions. I’m pretty lucky to get to train with this fabulous men every day. 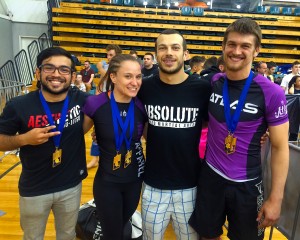 Lachie won his weight and absolute no gi fights with impressive BJJ. As always I’m super proud and want to be a bit more like him when I grow up. 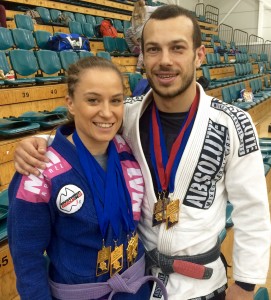 Our girls did amazing – for many it was their first Pan Pacs. I’m so happy to see our women’s team growing.

In the end we ended up taking home the 3rd place trophy for both our men’s and women’s teams, which was an excellent effort with such a small amount of entries. 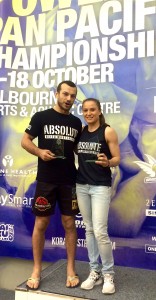 The following week Lachie and I headed to the Gold Coast for the 2015 Sports Medicine Australia Conference, where Lach presented a part of his PhD. The 4 days were full of work, learning and networking, but we did manage to squeeze in a couple of training sessions. Thank you to Vicente Cavalcante and Fabio Galeb for their hospitality and amazing training. 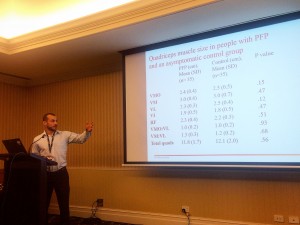 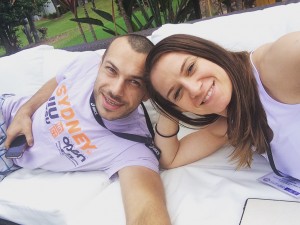 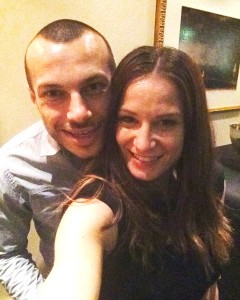 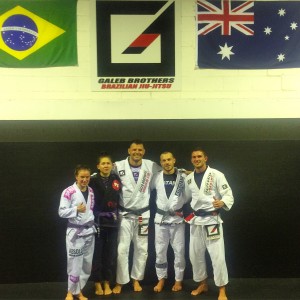 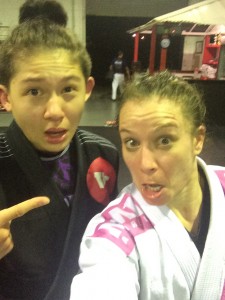 Met my match in Margot! 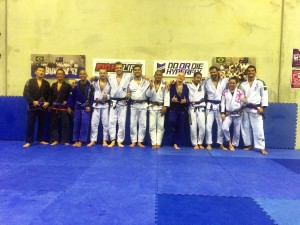 It was also a treat catching up with my most loyal and first Australian friend Mariana, who opened her house to Lach and I and showed us around her hood. 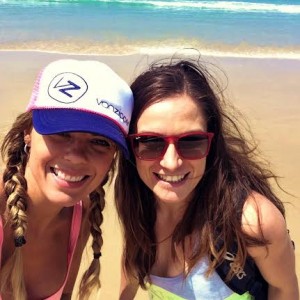 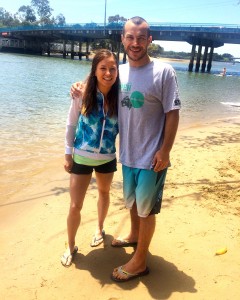 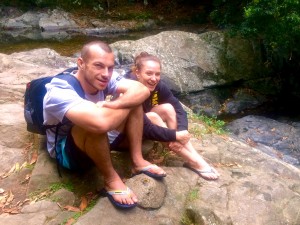 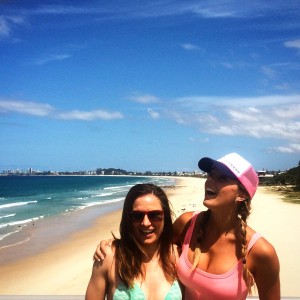 Here are a couple of highlights: 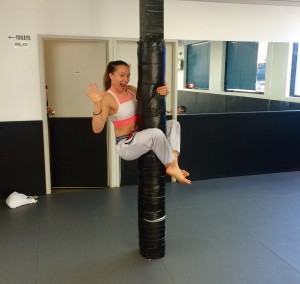 My complete failure at dealing with injuries.