Majestic…yep, I just used the wankiest word in the English language. But I truly think that the Galapagos Islands deserve that and every other magical word ever invented.

We travelled from Costa Rica to Quito, Ecuador and got in quite late. We got a taxi to our hotel and as soon as we started driving, I was certain that my death would come in a cab in Ecuador. The driver was nuts, speeding and overtaking through the corners in the mountains and to top it off he was 22 years old. All I could think of is that his brain was still developing and his risk taking behaviour was at it’s peak. I closed my eyes for most of the trip and when we eventually arrived at our hotel, we tried to check in and found out that our reservation never existed and that there was no space for us to stay.

Our driver assured us that he knew a place near the airport and took us there… but when we got there there, the owner wasn’t answering, it was in the dodgiest area I have seen, the street had an eerie feel to it and hell, the ‘hotel’ didn’t even have a door.

Relieved, we found a different, slightly better place to stay for the few hours of the night that we had left.

In the morning we flew to Baltra on Santa Cruz Island. My first impression was how big the island was – the cab from airport to hotel was at least 30 minutes. For some reason I imaged the Galapagos to be a series of tiny islands.

Our objective at Puerto Ayora (on Santa Cruz), was to book a last minute cruise. Before we left, we were debating whether to book online and save ourselves the trouble, or try to pick up a hot deal once on the island. After reading a few blogs we decided to wing it and hoped to find something that coincided with our preferred itinerary (the west side of the islands) and most importantly save a bit of money.

After a few hours of shopping around we settled on a boat that was due to leave in 3 days. ‘Estrella Del Mar’ is a 16 passenger boat that would take us on a 7 day, 6 night cruise around the west side of Galapagos. The reason we chose to go there is because day trips don’t go as far as some islands on our itinerary and there was a promise of more bigger reptiles, more animals and great snorkeling, as opposed to more birds that the east side offers. We agreed to pay $1100 each, which seemed a reasonable deal and ended up being about $500-1000 cheaper than if we booked earlier online.

With our cruise taken care of, we had to plan our next 3 days on Santa Cruz.

Andres from Alliance Galapagos volunteered to pick us up from our hotel. The small club was only a 5 minute drive from the main street. I was so excited to train and do a little exercise, but also slightly nervous to get back to BJJ, as it felt like forever since I’ve trained.

Lachie took the class and taught butterfly guard basics. As usual we did some specific training and rolled. I couldn’t believe how good it felt to roll again. It still amazes me that jiu jitsu reaches such remote places as Galapagos.

We trained each night and on Sunday, it was just myself, Lachie and Andres, which was great as Andres and I got to ask some specific questions on back taking from turtle and have a mini-private lesson from Lachie, followed by some rolls.

Of course the guys we met helped to plan our itinerary and even went as far as lending us snorkelling gear. 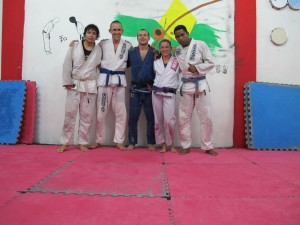 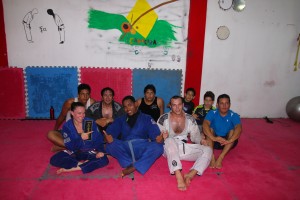 Lachie suffers from mild asthma and I, from exercise induced asthma, so diving is generally a no-no for us, but it was hard to go past an introductory dive at the freaking Galapagos Islands. We booked with Albatros Diving Tours for the next day and got a quick lesson in the afternoon. The following day, we set off at about 6am and picked up a group of 4 very experienced divers and watched them dive first. Looked easy enough. However by the time I got my 2 wetsuits on and all the gear, I had a little freak out when it came to diving in backwards.

We had a great instructor though and he made me totally trust him. But as soon as we got 2-3 m under water I started to feel claustrophobic and subconsciously breathing through my nose, which caused me to panic and swim to the surface. I kept trying to apply my breathing exercises I learned from my sports psych and it calmed me down enough to go back under. I was feeling great, but at about 8 m down, I suddenly started to float up pretty quickly. The guide grabbed my hand and deflated my vest quickly, but my anxiety and panic took a good hold over me from then on. It occurred to me that I may be a total control freak, and it was hard work concentrating on every breath and trusting the equipment and my guide completely. Lachie was a rock star and picked it up super quick and held my hand when necessary.

Unfortunately we didn’t get to see Hammer Head sharks as they hang around at about 25m, and we only went down to 10m. We did see a sting ray and a very aggressive Scorpion Fish and plenty of schools of colourful fish. It was beautiful and stunning and incredible. I only wish I wasn’t so cold and anxious, but in the end I still did it, I controlled my breathing and although I am slightly embarrassed by my panic attack, I am very proud of not giving up and working through it. 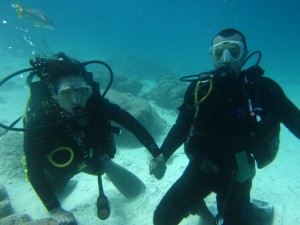 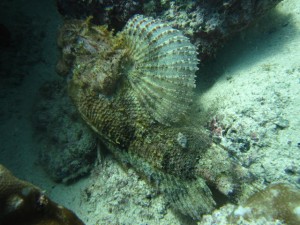 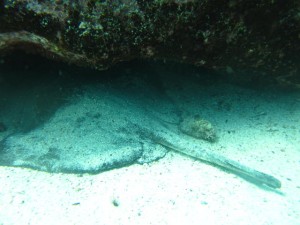 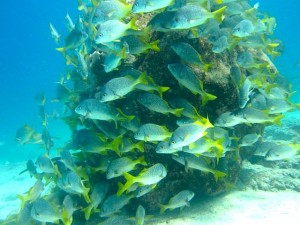 Tortuga Bay is about a 45min walk from Puerto Ayora. It’s a beautiful surf beach, where the turtles lie their eggs at night. We walked right to the end of the beach and turned the corner where we found a beautiful bay with a promise of many White Tip and Hammer Head sharks. Unfortunately the visibility in the water was so terrible that it was hard to see 20 cm in front. We still got to see some White Tip sharks, but it was probably too shallow for the Hammer Heads. 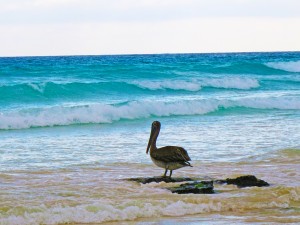 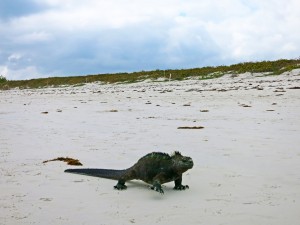 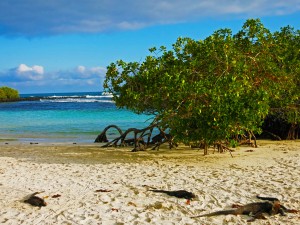 Tom from BJJ told us about the hike to Puntado at Media Luna. It’s a 4 hr hike up a mountain with 360degree views of the whole island.

We caught the local bus (25 cents) to Bella Vista, asked for directions and started walking. It drizzled pretty much the whole time, which I didn’t mind so much because it was rather refreshing. What I did mind is the massive cloud hanging over us. The hike was absolutely beautiful with ever changing vegetation at different altitudes, however when we eventually reached the top after some steep climbing all we could see was the damn cloud. As we descended down we spotted a Short Eared Owl, sitting about 4 m away from us. We could get very close to it and it was just curiously looking back at us for about 20 minutes. I couldn’t get enough… she was absolutely beautiful. 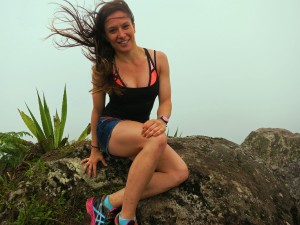 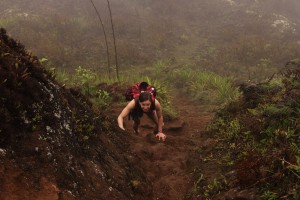 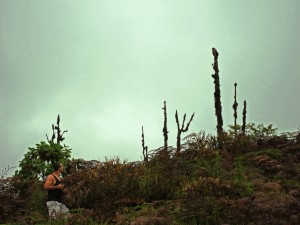 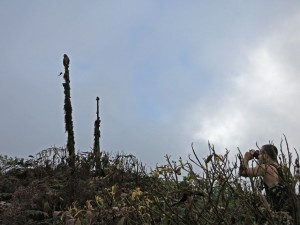 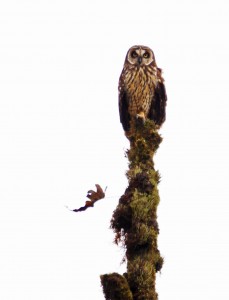 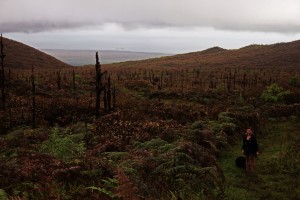 As well as a BJJ and capoiera instructor, Andres is also a chef, and luckily for us he invited us for lunch to the ranch where he works. As we walked around looking at the amazing giant tortoises, Andres prepared our food.

The were plenty of tortoises, some of them as old as 150-200 years. It was great to learn about them and how they evolved differently from island to island due to isolation, different landscapes and vegetation. We even got to see a couple mating!

Another thing to rave about is the food. It was by far the best meal of our trip (even better than the Cuban lobster). We had Ecuadorian fish soup with peanut butter and then tuna with a yuka fritatta. Delicious! 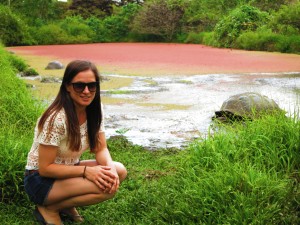 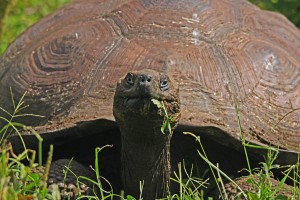 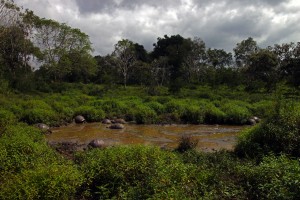 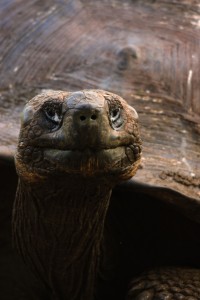 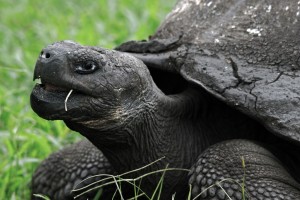 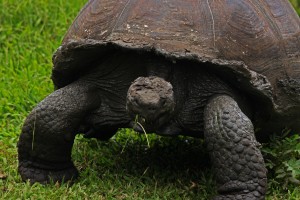 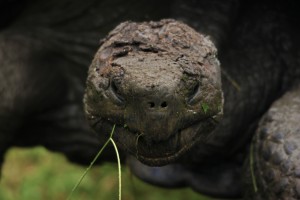 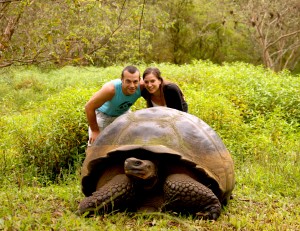 I was expecting a big visitor centre with the history of the formation of the island etc, but the Darwin Research Centre is just that – scientific centre with no access to visitors.

It does however have some giant tortoises. The reason why they are in captivity is because there are some hybrid tortoises that there are not letting to inter-breed between the sub-species. This is also where Lonesome George died last year – the last tortoise of his particular species.

These activities filled up our 3 days at Santa Cruz and we couldn’t wait to jump on our cruise. Puerto Ayora has already proven to be better than I expected and so different to what I imagined. I was not prepared for the magic that awaited…