Last weekend was a very BJJ packed and an extremely special weekend. Firstly, my boyfriend Lachie received his black belt at the Renegade competition.The next day my amazing team mates Jess Fraser and Tom Parks graded for their purple belts at Maromba. It was such an honour to be a part of both gradings. 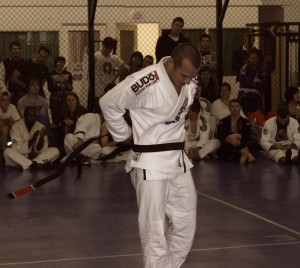 I am so proud of Lachie achieving ‘Faixa Preta’ from John Simon. It is such a huge achievement, that as a little blue belt, it’s still hard to conceptualize it. It was an honour to watch him roll 1 minute with every brown and black belt who helped him get to where he is today, before receiving his belt. The ceremony finished off with lots of photos, speeches and a ‘black belt’ cake. It has been 10 years of hard work for Lachie, and I am sure this is just the beginning of a new journey for him. I am so glad I could be a part of this experience. 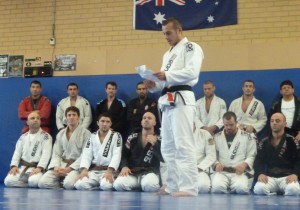 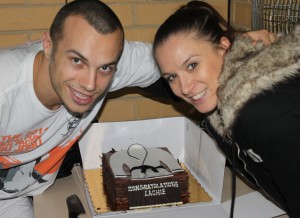 Too much cake is always a good thing

The next day, saw my team mates being graded by our coach Thiago Stefanutti. Jess and Tom had to do a 2 hour skills ‘exam’, followed by a two hour roll. I have to say, watching Jess put everything she had and fighting every opponent and still smashing people 1 hour 45 minutes into the roll was damn amazing. She has had a great year, winning bronze at Abu Dhabi Pro and silver at the Mundials. Jess is the best training partner I could wish for and a great friend, who keeps me laughing every day. Super proud of both Jess and Tom. 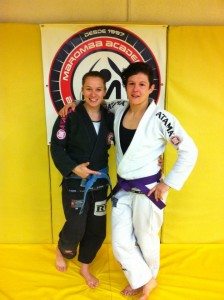 I also received my first two stripes on my blue belt from Thiago, which I am very proud of. Definitely motivation to work even harder. 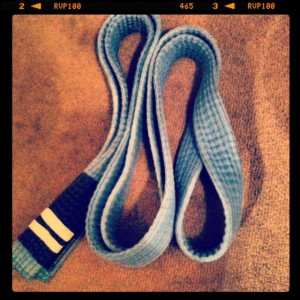 Before Lachie’s ceremony, I competed at Renegade Round Robin comp. It took a lot of discipline to play my weakest positions, which I wanted to test out and work during my fights. I had 5 fights, with blue and white belts combined. I have to say, sitting to guard with opponents up to 30-35kg heavier than me, caused some anxiety and took a lot of courage. I got my guard passed only once, by a mistake which I have already fixed, and am slowly gaining confidence to open up my jiu-jitsu game and try new things. I have lots of work to do, but I was happy enough with some components of my performance.

For now, it’s back to training and learning.

Next week will see AGIG Victorian girls all jump in a van and drive to Adelaide to compete at the Synergy Pro competition in Adelaide. But more of that in the next blog… Very, very excited!

A Week at Cicero Costa’s