Even though I got back home a few days ago, I am still pretty jet-lagged. The 6-hour difference between Melbourne and Abu Dhabi is killing me, but it hasn’t stopped me from getting right back into my routine of hard training and work. Only a month left until Worlds, and I want to leave no stone unturned.

In all, Abu Dhabi was an amazing experience.

Lachie and I met the Sydney crew when we arrived at the destination at 6 am. Of course we had to stay at separate hotels (Lach was in a black belt hotel), but even if I was also a black belt, we would be put in separate rooms, as we are not married. It was a strange feeling being there with my partner, but sort of not being there with him. Lucky for me, I got to room with Hope, who is a fabulous room-mate. 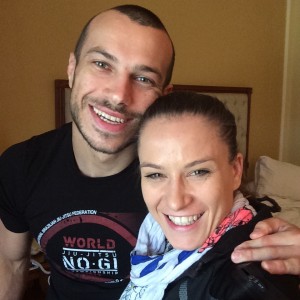 We did a light training session on the day we arrived, rolled a little and refined some details. 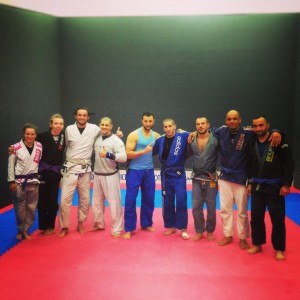 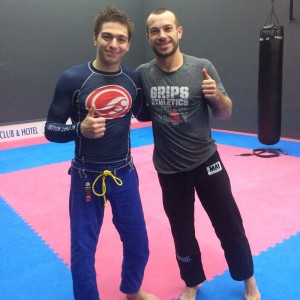 Then Lachie, Hope, Marko and I got in the cab to Yas Island and went straight to a water park. It was actually the most fun I’ve had for ages and I went on all the scary rides. I get claustrophobic when it comes to closed tube-type rides, but I did them all and was super chuffed with myself. The 40 degree heat was a nice welcome to my pasty skin from Melbourne’s freezing weather. Hope and I also broke all the rules by wearing small bikinis and taking some possibly inappropriate photos. It was great to get the adrenaline dump out of the way and get rid of some nerves. 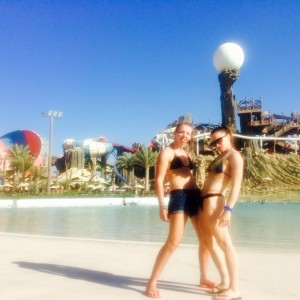 What’s a bikini shot without some pelvis in it? 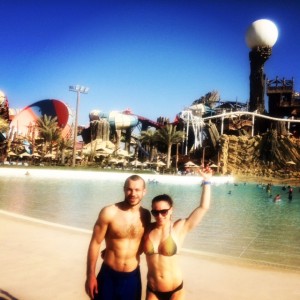 The hotel had an amazing buffet for brekkie, lunch and dinner, so I was happy to not have to cut for the 55kgs division and ate all the things. As we proceeded to the weigh-ins, someone informed me that Lachie’s gi didn’t pass as it was ‘rip-stop’, so I was worried about mine. As we went into the change room where all the girls hang out, I had offers of gis to use if needed. My hero Janni Larson was even willing to lend me hers to compete in the next day! It was also a pleasure to finally meet Erin Herle in person (Instagram is not real life, apparently). We made a pact there and then to make Joao Miyao smile during our time in Abu Dhabi. Because why not, right? 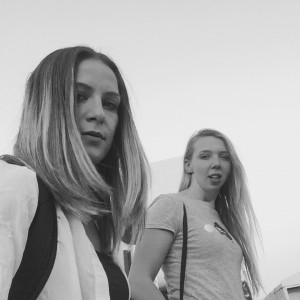 The next morning, I did a little bit of drilling with Lachie in the room of dreams – where all the competitors roll together and then I rested for the reminder of the day. It was nice to laze by the pool with the Aussie girls and catch up with my Brazilian sisters Renata, Natalia and Gessica. I miss training with them every day. 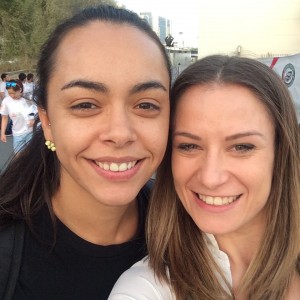 Little Monster Renata and I 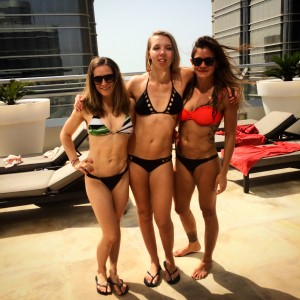 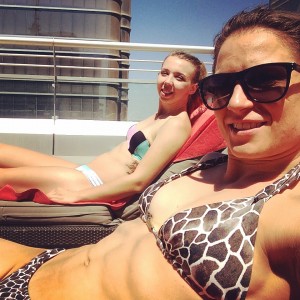 I woke up ready and couldn’t wait to compete. My bracket was as hard as it gets, so I knew I had to be 100% switched on.

After a long wait, my opponent and I finally tapped hands. I think I fought relatively well, even though the results didn’t reflect it.  Brenda got an advantage for holding my foot from inside closed guard (I think it was meant to be a foot lock). She had a very tough spider lasso guard, which I finally managed to break, made her turtle, stood up, took her down and we landed back in her guard. No advantages or points for me.  With 20 seconds to go I was down for an advantage and knew I needed to do something. I sat back for a tight footlock, but instead Brenda scored 2 points against me for a sweep, with the sub still on and again, no advantage for me. The timer went as I was still trying to sub. So that was it. First round loss in a long while. It sucks only having 6 minutes of mat time in the whole tournament and it really hurts to lose. But I am looking at the positives and the lessons learnt. I gained confidence knowing that I can do very well with the best girls in my division. I know I can trust my game. I listened well to Lachie’s coaching. I know what mistakes to fix – I have been drilling and specific training them each day, every day since. This experience has motivated me to not ‘just’ hold my own with the girls, but to be so much better, that no one can argue points or advantages. I trust in my training, and I know my time will come.

It was great to watch and support all the Aussies. Lachie had a tough 1st round loss – his opponent scored sweep points very early on and despite Lach’s amazing sweep attempts, he wasn’t able to consolidate. Hope, Mary and Demi all did amazing, but also lost their first rounds. Will Diaz had a great fight with Keenan, young gun blue belt Levi fought 6 fights to earn a bronze medal, and Marko had a great run to win a silver in the white belt division. 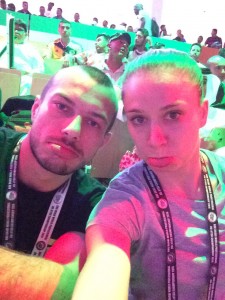 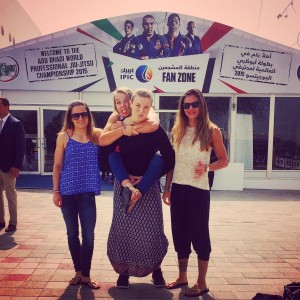 The atmosphere of the competition was incredible; with full audience and some great fights, it’s a comp I don’t want to miss again. I was pleasantly surprised by the encouragement the local women received to participate and compete… maybe one day the ladies will have equal prize money to men. UAEJJ announced that they will be expanding globally by holding tournaments in 7 cities around the world, including Sydney. The prize money promises to be the biggest yet and it seems that they are making every effort to make BJJ into a professional sport. Exciting times.

We spent the rest of our time watching the competition, drilling and rolling. I got to roll with Erin, which I really enjoyed –  she is tough, super technical, nice and most of all fun. And yes, we did take a selfie with Joao (sorta) smiling. Mission was complete! 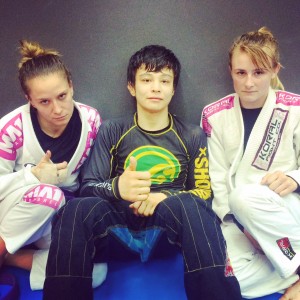 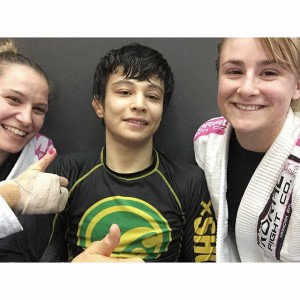 Just kidding… there is a smile! Photo @erinherle

Poor Hope hurt her foot during her fight and couldn’t weight bear. I tried hard, but failed to get her crutches. After a cab ride to a hyper market, 3 pharmacies, a hospital and a medical supplies shop, I gave up. Abu Dhabi has no crutches. Fortunately Demi and Mary were excellent camels and offered Hope rides for 3 days. It was odd, but it worked. 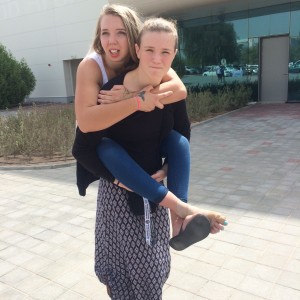 Demi being a good camel 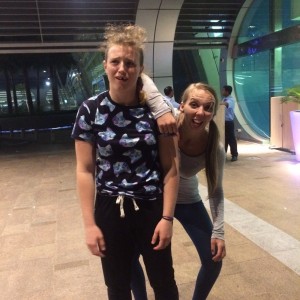 Demi so over being a good camel

Before our departure back to Australia, Lachie, Demi and I went to visit the mosque. The building was beautiful and the architecture was stunning, however I can’t say I enjoyed covering up from head to toe in a 40 degree heat. Since Lachie’s knees were covered by his shorts, he got away sight seeing without any heat strokes. 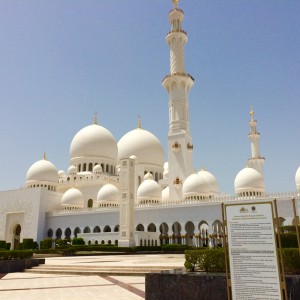 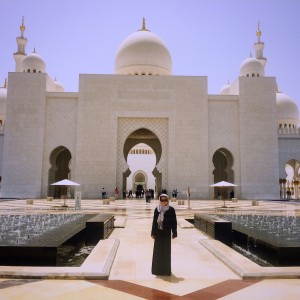 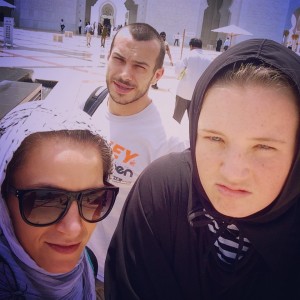 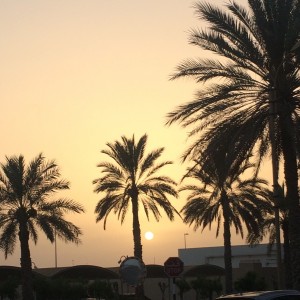 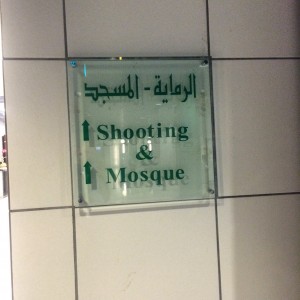 Makes all the sense

I didn’t win this time, but I love that I get to train, improve and travel the world doing what I love. I am living the dream. And there is nothing like a loss to motivate me to kick some ass next time. 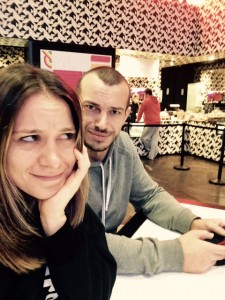 My partner in crime. Perhaps even weirder than me.