Last weekend was a busy one. Originally I planned to compete at the Grappling Tournaments Australia comp on Saturday, and then the trials in Sydney on Sunday. As my hand was broken and there were very low entries for purple belt females at the GTA, I decided to sit out.

The GTA organisers are so supportive of grapplers that I wanted to give back and volunteered help out and referee all day. I think I was more nervous then actually competing, but after a few matches I got my groove and felt like I could concentrate better. I recommend that every BJJ fighter does the rules course and refs at least once in their life.

As soon as the competition was over, Lachie and I drove straight to the airport to get the last flight to Sydney. We were picked up by my good friend and a fellow purple belt Eleni and her boyfriend Eric, who offered us a bed for the night. It was so lovely to catch up with them. 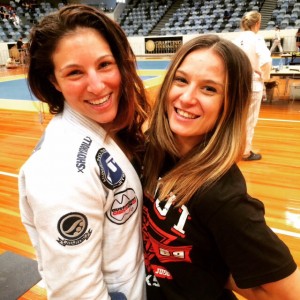 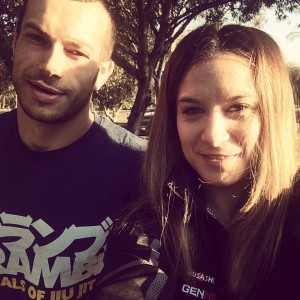 I originally I never planned to compete at the trials due to the fact that it was a purple-black under 65kgs division. At 53kgs, competing up at 65kgs is a bit of a stretch, let alone being merged with brown and black belts. But when Lachie found cheap flights and Eleni offered us a place to stay, I thought I could at least give it a go.

For some reason the interest and the entries for this year’s trials were at all times low. To be eligible to win a ticket there had to be at least 4 entries per division. The morning of the day the registrations closed, we still had only 3 entries, but needed at least 8. My chances at competing were looking bleak as after a chat with my sports psychologist, we decided that if they merged the divisions, it was unsafe for me to fight with a fractured hand.

So then Jess Fraser and I started plotting. We both felt that it was silly to let a ticket go to waste and give the organisres more of a reason to NOT support women in the future. So we begged, hassled (perhaps even borderline harrased), encouraged and individually asked pretty much every purple, brown and black belt we knew to enter. I even had Michelle Nicolini willing and ready to jump in and compete to support us. Special mentions go to the New Zealand BJJ community and especially NZ Girls Grappling who got together and sponsored Serina Cole to fly over for the weekend. TUF competitor and UFC fighter Alex Chambers also voluntereed to put on a gi and compete at the trials. Jess moved up to the over 65kg division and we also had a black belt (Louise) ready to go up if we needed to.

By midnight we had 9 competitors entered and enough to make up a light open and a heavy open. At this point I didn’t care who would win the golden ticket… it was a massive accomplishment, a total community win and a way to guarantee Aussie women get more tickets and exposure overseas. 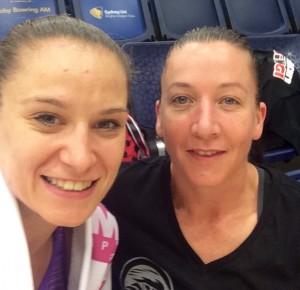 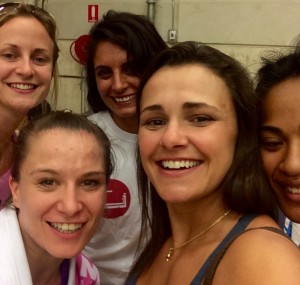 Come competition day, no one really knew their start times or schedules and the comp was very disoreganised. I was absolutely exhausted in the morning and found it difficult to keep focus all day.

They called Lachie’s division up first and he proceeded to destroy each competitor in his way. I was so happy to see his hand raised in the final and earn his way to Abu Dhabi, especially after so many years of coming a very close second, yet quietly persevering.

Now that Lachie had a ticket, I really wanted one too.

I knew I had to try to finish my fights quickly, as I wasn’t sure my hand would hold up for 6 minutes. It was the first time out of a splint and first time doing two-handed BJJ since the injury. I knew I had to be able to protect my hand.

I only had one fight in my weight division, which I finished in just over a minute. I pulled spider guard, got a nice sweep, passed to mount and subbed with an Americana. 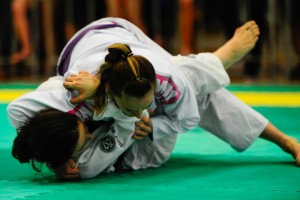 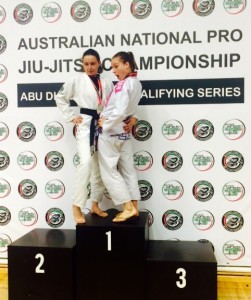 No idea why I’m doing that?!

I wasn’t called up to fight in the Light Open till about 6pm. It was hard work not knowing when I would fight next, not really eating or resting and trying to keep the concentration up for so many hours. I wasn’t in the mood to socialise or small talk – this was time to get a job done.

My first fight started a little scrappy, but I got a quick sweep, a smash pass and as I was going for an arm-bar my opponent hurt her shoulder and the fight stopped.

My final was against a great competitor Sunny whom recently received her brown belt. Sunny has an incredible guard and my original plan was to come up and try passing. When we double pulled though, I changed my mind and thought I would try for a sweep and get some points first. After feeling it out with some spider shin on shin guard (thanks Michelle!), I found a quick triangle and got the tap in about a minute. 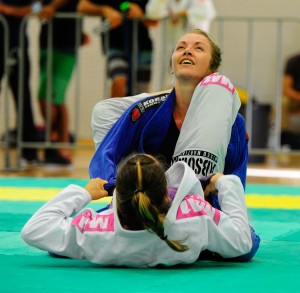 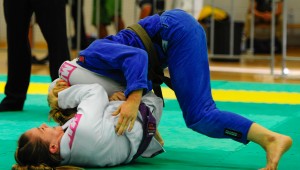 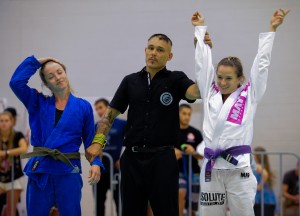 I couldn’t quite believe I won the ticket! I think this is the 5th time I tried – 2 x in Australia, 2 x in Brazil and 1x in New Zealand. I’m so happy I will get to experience it with Lachie, catch up with Michelle and many of our Brazilian friends and training partners. 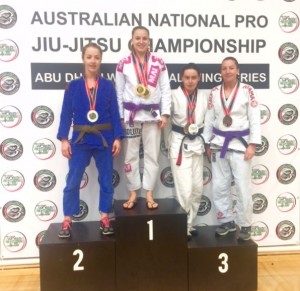 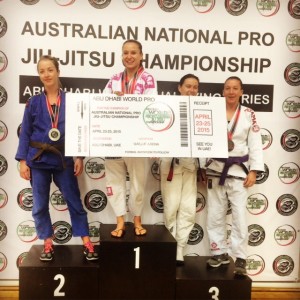 What I really loved about this comp is how the Australian and NZ community got together and supported each other. There is a lot of mutual respect amongst us, which makes competing valuable and fun.

For now though, it’s back to the gym, working on improving my game as always. I can’t wait to have a full use of my hand again!

Thank you so much to my sponsors and training partners, who continually kick my butt. Absolute MMA & Conditioning, MA1 Apparel, Musashi/PowerBar and 34s Core Tactics all play a major role in my development as an athlete and allow me the absolute privilege of training and competing in this sport.

My coach and partner Lachie not only teaches, drills and rolls with me, but also provides me with a healthy dose of reality check everyday. Most importantly never doubts my jiu jitsu and the potential to constantly improve.

My sports psych Anthony has been instrumental in my BJJ journey for the last 2 years and more importantly he has helped me to become a better, more confident, and a settled person. 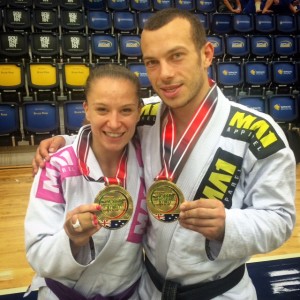